Shiba Inu puppies melted the hearts of many people when a viral video of a Shiba Inu (Mari) and her three puppies was spread across the internet. They became famous for saving an old man and his granddaughter under the planks of wood from their collapsed house because of the 2004 Niigata earthquake.

The Shiba is considered the smallest of all Japanese dog breeds. Yet, despite its size, the Shiba Inu is known for its excellent hunting skills. Believe it or not, the small and brushwood dog was built for hunting bears and boars. The breed almost went obsolete when the World War II occurred but some breeders were able to rescue the Shiba. Today, it is one of the most popular household breeds in Japan. Its versatility is impeccable. This breed wears many hats ranging from being a watchdog, guard dog, show dog, companion dog, hunting dog, etc.

The most prominent feature of Shiba Inu puppies is the fluffy and straight coat. The Shiba Inu actually has two coats. The undercoat is soft and thick while the outer coat is stiff and straight. You will see Shiba Inus in several coat colors black with tan markings, sesame with red markings, cream, red, or red with hints of black. Shiba Inus definitely have markings on their cheeks, muzzles, throat, chest, and underside. Their muzzles are round and narrow toward the nose, their lips tight, triangle ears erect, and their eyes triangular. Their tails are very distinct because they curl over the back. Their body structure is very compact.

The earthquake video may have portrayed the Shiba Inu as compassionate, courageous, and loyal. While these characteristics are true, it takes a good deal of training to mold Shiba Inu puppies. This breed is known for its strong and alpha personality. Needless to say, you should expect the Shiba to be stubborn. In fact, this breed is not recommended for first-time dog owners because improper handling may cause the Shiba to be domineering and destructive. It’s important to train Shiba Inu puppies firmly and as soon as possible. Establish that the human is the leader in the master-dog relationship. Shibas are very loyal dogs so expect them to be a little reserved with strangers. Towards an effective master, this breed is very loving, courageous, kind, playful, and alert. If you decide to keep a Shiba Inu, only keep one breed in the house because Shibas tend to rule over other dogs. Don’t mix them with small animals because the hunter in them will only be harmful to the smaller pets.

You can keep Shiba Inu puppies in apartments as long as they get moderate exercise regularly. Be wary of hip dysplasia and patellar luxation with this breed. Shiba Inus are social dogs so maintain a health and loving relationship with your puppies. While they are not hyperactive dogs, Shiba Inus certainly appreciate physical activity. They’re remarkably smart so keep their minds alert with training and activities. Start obedience training as early as 4 months. Shibas tend to become destructive when they’re bored. 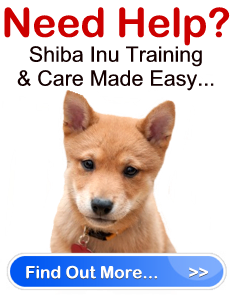